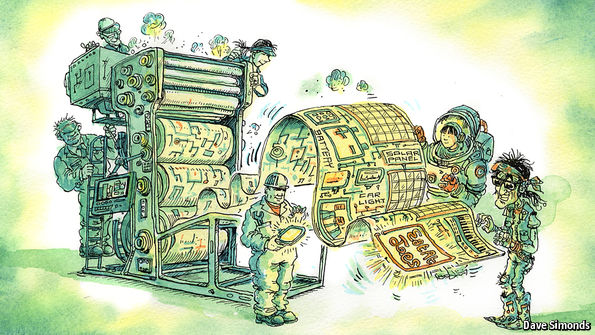 MAKING things with 3D printers is an idea that is being adopted by manufacturers to produce goods ranging from false teeth to jet engines. Conventional printing, though, has not remained idle. Machines that have their origins in the high-speed rotary presses that apply words and images to large reels of paper, like the ones which turn out the physical versions of this newspaper, have started making other things as well.

The extent of this transformation can be seen at a factory in Accrington, a town in one of Britain’s former industrial heartlands, Lancashire. Here, Emerson & Renwick, founded in 1918, has expanded beyond its formative business of making wallpaper-printing equipment. The latest piece of kit to which the finishing touches are being added is part of the firm’s Genesis range. It is about the size of a shipping container and is designed to coat and print electrical devices. Like a conventional printer it does so on long rolls of material, called webs. Then, just as printed pages are cut by guillotines from such webs for binding into newspapers, magazines or books, these printed items are cut out and used in products ranging from solar cells to display screens to batteries. One customer wants to print some of the main components of a new generation of smartphones.

Roll-to-roll printing of this sort is quick and efficient. Some of the fastest web-offset presses, in which an inked image is transferred to another roller and thence to the surface being printed, can churn out more than 20 newspapers a second. Flexographic presses, which use a flexible relief image on a cylinder to print things such as packaging, can belt along at 500 metres a minute. These methods have already been adapted to print basic electronic circuits, by replacing conventional graphic inks with conductive inks that can carry an electric current. Scientists and engineers, however, have loftier ambitions than these. They are developing ways to print not just circuits but also sophisticated electronic devices, such as thin-film transistors, using the mass-production capabilities of roll-to-roll processes.

Transistorised, at half the price

The machine in Accrington is one such offering. It puts sequential coatings onto webs of material such as plastic film, flexible glass and metal foil. Some coatings conduct. Some insulate. Some are semiconductors. Some emit light. Emerson & Renwick produces special carts, each the size of a large oven, which are wheeled into the printing system to configure it for different applications. Some carts contain equipment that accelerates ions from a plasma onto a source material, in order to spatter molecules from that source onto the web. That allows printing at the atomic scale. Others perform a similar trick using a beam of electrons. Others still employ chemically reactive gases to etch features such as holes and channels less than 50 nanometres (billionths of a metre) across into the coatings, for electrical connections. To avoid contamination, all of these processes take place in a vacuum.

As exotic as the Genesis machine may seem, though, many of its underlying technologies are, according to Colin Hargreaves, Emerson & Renwick’s boss, similar to those found in a conventional graphics press. In particular, careful management of the web through its winding, tension and control is essential. A break in the web, as any newspaperman knows, brings production to a time-consuming and expensive halt. When printing electronics with such exacting processes in a vacuum, a web-break is potentially catastrophic as it could damage a whole reel.

Printing electronics requires special formulations of ink. Often, these are made with silver, which is a better conductor even than copper. But silver is expensive. An alternative, being worked on by Tawfique Hasan and his research group at Cambridge University, is to include flakes of graphene in such inks. Graphene is a form of carbon made from sheets a single atom thick. The result, Dr Hasan claims, can be manufactured and printed for a fraction of the cost of silver ink and is conductive enough for many applications, such as disposable biosensors used to test samples from patients, and packaging that can track and authenticate a product. Graphene ink could also be used to make electrodes for printed batteries.

Dr Hasan and his colleagues have demonstrated flexographic printing of conductive graphene ink at more than 100 metres a minute. They are working in collaboration with Novalia, a firm in Cambridge that has produced several printed touch-sensitive products, including a musical keyboard and interactive posters. They have also established a company called Inkling Cambridge to commercialise the formulation and develop other electronic inks, coatings and paints.

One idea they are exploring is “smart” wallpaper. In addition to graphene ink, this would use either organic light-emitting diodes (OLEDs) or quantum dots—crystals of semiconducting material just a few atoms across. Both of these emit light when excited by electricity, so wall coverings printed with such materials could be used to illuminate rooms.

Elsewhere, Taiwan’s Industrial Technology Research Institute plans to open a roll-to-roll line in 2017, to make OLED lighting panels for display screens, decorative lighting, signage and exterior car lights. These will be printed on rolls of plastic film or ultra-thin flexible glass. The institute says its system will incorporate seven separate processes, including coating, baking and etching, into a single roll-to-roll machine. At the moment, each process requires a different apparatus, and the products have to be made one at a time, or in batches.

Another use for printed electronics of this sort is solar energy. Several groups are working on making thin-film solar panels in this way. Such panels, being cheap and lightweight, could readily be attached to walls and roofs, and even built into roofing tiles. In this context, a family of crystalline materials called perovskites is attracting particular interest for roll-to-roll printing. Whereas the best conventionally made silicon-based solar panels convert the energy in sunlight into electricity with an efficiency of just over 20%, researchers at the Lawrence Berkeley National Laboratory, in California, think they can push that to 31% using perovskites. And being small, crystalline grains, perovskites make ideal ingredients of ink.

Inkjet printing is also getting a roll-to-roll makeover, according to David Bird of the Centre for Process Innovation (CPI), a British government-backed organisation that helps companies commercialise new technologies. Inkjet printers are not particularly fast, but they are parsimonious, for they spray ink only where it is needed. Moreover, they are flexible and easily customised. To alter what is being printed requires only a software reload, rather than the changing of a printing plate. And lack of speed is relative. The CPI’s inkjet machine can, for example, print copper circuits onto rolls of plastic at a rate of 17 metres a minute. These circuits are used for things like sensors and radio antennae. Electronics can be made with 3D printers, too. These produce objects by depositing successive layers of material. Like inkjet printers, 3D printers are flexible, but they build things one at a time or in small batches and are mostly used to print larger objects.

As Dr Bird points out, printing of any sort at speed demands good quality control. Single-sheet or batch production permits an error to be spotted before it is repeated, but high-speed roll-to-roll systems can churn out a lot of waste if there is any delay in identifying problems. Cameras can be used to detect errors in printed text or graphics, but they are not much cop at spotting faults in microscopic layers of transparent material whizzing past on a web—not least because there may be nothing to see. To help resolve this for the CPI’s machines, researchers at the University of Huddersfield, across the Pennines from Accrington, in Yorkshire, have come up with a method that builds up a three-dimensional model of the web’s surface using reflected light, and can raise the alarm if it detects any depressions that might indicate an uncoated spot.

A new meaning of “computer printer”?

How far printed electronics will go remains to be seen. At present such products tend to be used as components rather than complete systems. The technology is a long way from being able to roll-print powerful computer chips, which contain several billion transistors squeezed onto a tiny piece of silicon. These processors are currently made in batches in costly semiconductor fabrication plants.

Using roll-to-roll systems to print lots of transistors in the form of a processor is nevertheless an attractive proposition. In many applications these processors need not be very powerful. But they won’t be wimps. Ma Zhenqiang of the University of Wisconsin-Madison and his colleagues recently fabricated a flexible transistor that operates at 110 gigahertz—making it fast enough to use in almost any electronic application. To make this transistor Dr Ma used an electron beam to etch shapes just ten nanometres wide in a mould that was then employed to form the transistor’s circuitry in an ultra-thin flexible silicon membrane. As the mould can be reused, Dr Ma reckons his method could easily be scaled up for roll-to-roll processing. Printed media may be going out of style, then, but it looks as if their electronic replacements will still require the presses to roll.